Menu
Log in
Register
Install the app
You are using an out of date browser. It may not display this or other websites correctly.
You should upgrade or use an alternative browser.

Staff member
Good idea, thanks.
A

I’m not sure if this is supported already and I just didn’t find it:

How about an option to strip an entry of all html (barring entities) when exporting it to Anki as a flashcard? I have my own card format so I find myself having to delete the a bunch of html from every card I export from Pleco. Not that I wouldn’t have to edit them a bit anyway (putting word class in a separate field, adding examples etc.) but stripping the html sounds like a relatively simple modification which could save me a few very mechanical steps.

Staff member
Not too tricky, but which formatting are you trying to remove? Unless you've turned on the option to format cards like dictionary entries there shouldn't be any formatting anywhere except the definition field, and most of that if of a sort that seems unlikely to conflict with your format (bold tags around sub-definitition numbers, gray part of speech labels, e.g.) - is that nonetheless something you'd prefer to have in plaintext?
A

I have the formatting as Pleco headers off for all fields if that’s what you mean.

When I export a card (from, say ABC), I get: a <div> element for alignment around the whole thing, multiple <b> elements (around the word class, the numbering for meanings etc.), <span> elements which adjust the font size of word class labels, as well as a <plecoentry /> tag at the end which I’m not quite sure what it does (just an ID maybe?). I’m pretty sure I also saw <br /> tags in other dictionaries (although that may be limited to custom ones, not sure…). Of course, they don’t conflict in the technical sense of the word, but they don’t fit the formatting I use on my flashcards. So it’s mostly a question of consistency (although I imagine that in the case of very long entries, the line breaks – be they caused by <div>’s or <br />’s could make a card annoying to use because it’s too long vertically). My suggestion would be to provide an option which would first add a space after anything that would case a line break (i.e. all block elements as well as <br />) and then strip away everything which has <>’s around it. Entities like &#8764; (∼) are probably best left alone because most of them stand for characters important to the text. The only exception could be invisible things like non-breaking spaces or maybe the &#9; control character (which I’m not completely sure what it does) after numbering.

It would be great if when you convert a card to custom card to mantain the dicionary format. I would just like to edit the definitions, delete some examples and maybe add new ones without altering the entire structure of the flashcard

Love this app. Thank you so much for your great job

option to configure dictionaries individually. concrete thing im thinking about: having cantonese audio and phonetics enabled for cantonese dicts only; and mandarin for mandarin...

Staff member
@rizen suha - Maybe with two separate search groups? We are planning to put some more customizability into those, could feasibly include configuring how results are displayed.

Small clarification: it'll be HTML but a limited subset of it, akin to an EPUB; even in 2017 we're still not entirely happy with the performance of rendering entries as web pages (particularly when we're overlaying other stuff like our tap text selection system on them), so it'll still be running in a custom Pleco text renderer just as now, but we've replaced our old private use character formatting tag system for that with HTML.

mikelove said:
@rizen suha - Maybe with two separate search groups? We are planning to put some more customizability into those, could feasibly include configuring how results are displayed.
Click to expand...

thanks, yes, independent search groups would be a good idea. and for most purposes 2 would probably suffice

I don't know if it is supported already and I didn’t find this: a function to select one definition/meaning for a word/character in a flashcard. For example in the Hsk5 deck for the word 批 I would like just to show that is used as a measure word because in the Hsk5 test it is present like this and not as "slap" or "scrape" or other definitions.

Staff member
In the works for 4.0, but right now the only way to do that would be to edit the card definition (and create two cards if you want one for the old definition too).

That works for me.
P

Request: in the History CARDS page, please group entries by date/time. Every other page has date/time displayed.

A thought just occurrences to me, would it be possible to display the tags in the top right corner when doing a flash card session? It’s be a nice visual cue as to what logical groupings this card belongs to (ie: HSK4/HSK6, etc.) it seems there is plenty of space in the top right, especially on my iPad.

May you add "highlight" word in text reader please . When I open recent documents I wanna see the words that were new for me , so fast look through them in contexts . So don't need read these big texts from the beginning . Thanks

Staff member
Sorry, not quite sure if I understand - you want it to mark words that are not in your flashcards?
P

When both pinyin and jyutping readings are enabled, the speaker audio buttons are (often) located very close to one another. This makes it difficult to press the intended button. 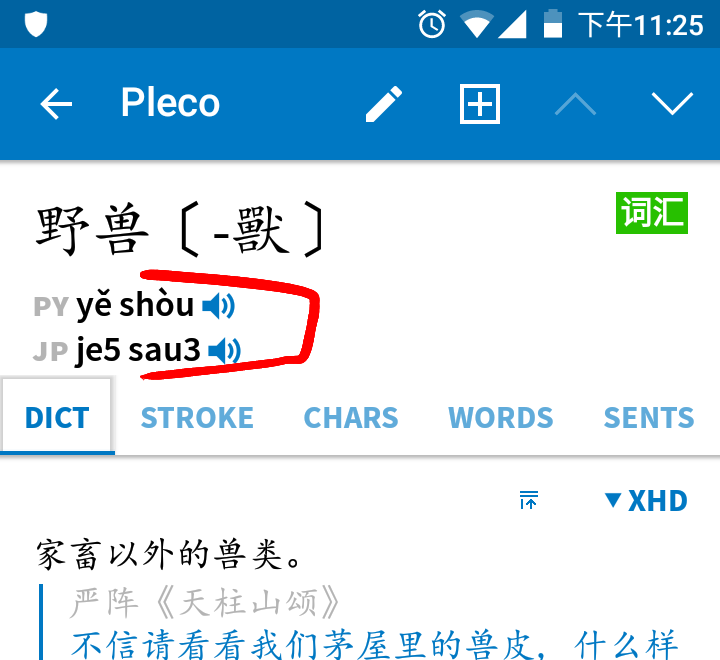