I consider the field of Chinese paleography and the study of Chinese writing as a big thicket of separate research efforts. There is so much data to look at when trying to determine the meanings and history of character components that research often relies more on legends about characters rather than on strict scientific method—especially Chinese research. That's also what I've heard others tell me about it.

It's a good thing that Outlier Linguistics uses novel methods, which I am not completely familiar with, to bring some order, but there will always be differences between different research in this field. After all, unlike math or computer science, many branches of linguistics are an inexact science.

As a learning strategy, I'd suggest that you make your own observations as you study the characters. The most effective way still is, I believe, to get sheets of checkered paper, using groups of four little squares as your writing area for each character. First, you copy a character from a book/from Pleco to the checkered paper using the proper stroke order. Then, you cover up the character you've just written and try to write it again from your memory. If you got it wrong, you write it correctly the next time, and once you're getting it right, you repeat it another ten times, covering up each character from the left each time so you can't peek. I've heard that's also how Chinese elementary school pupils have always had to learn Chinese writing.

The normal definitions of character components in Pleco's dictionaries are also very instructive. For example, it helps to know from the dictionaries that 火 huǒ means "fire", and the 火 radical often appears when cooking or heat is involved. Or 手 for activities that are or once were done by hand. Same thing for many other elementary radicals. As you can see, you don't even necessarily need Outlier for this useful guideline.

Just so you know, I’m currently able to recognize somewhere between 3'000 and 4'000 characters; so I am quite experienced but not extremely so.

Monkey Hanger said:
One other minor thing is 艹 is shown in the dictionary as cào rather than cǎo how it’s often reportedly spelt in pinyin from other sources . That is odd, esp. as cào is basically universally known as f*** in Chinese.
Click to expand...

If I look at my dictionaries for both 艸 and 艹, I only see cǎo, with no alternative pronunciations (none listed on the Chars tab), including Outlier’s dictionary.

Did you import your own dictionary that might have different info? 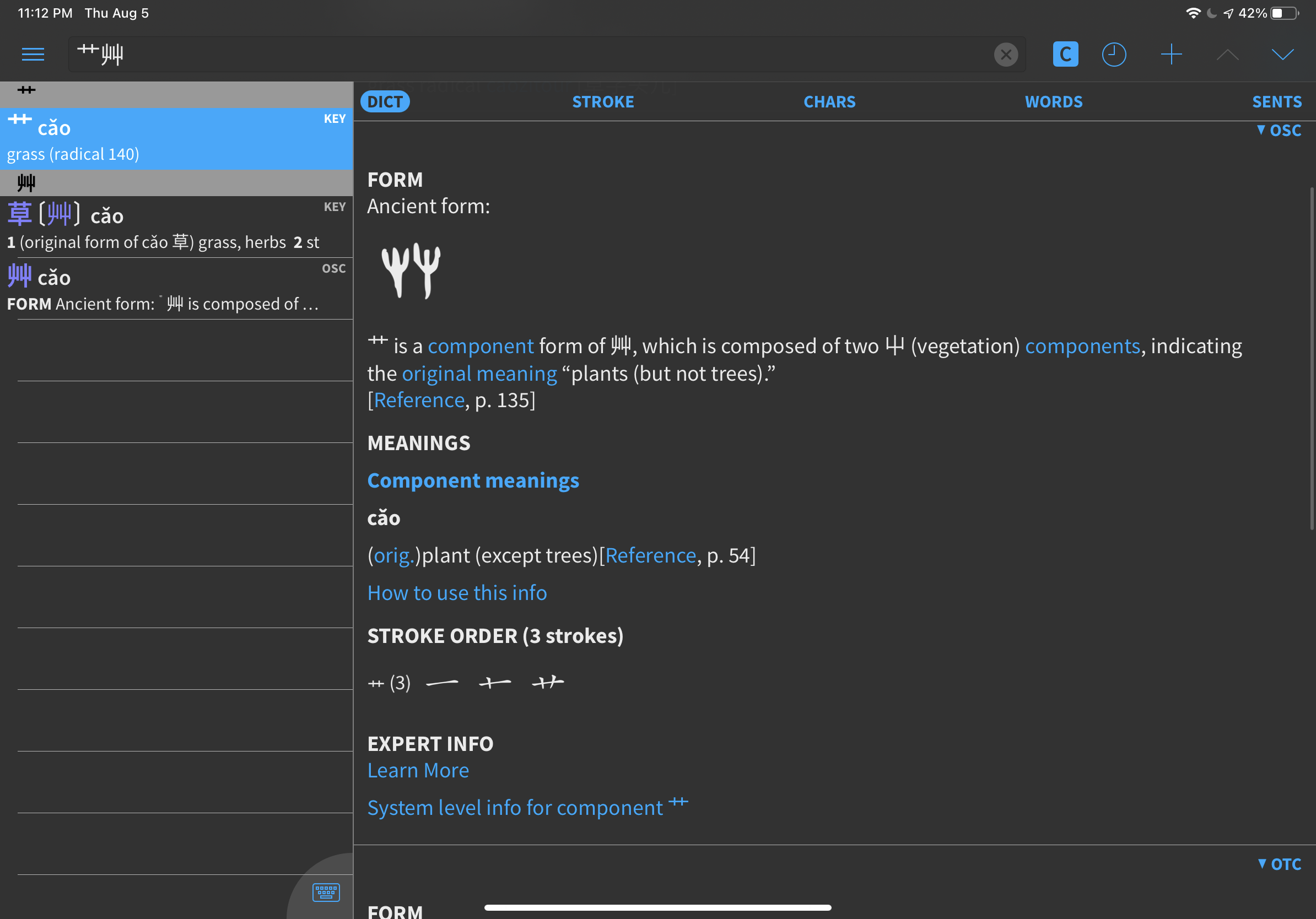